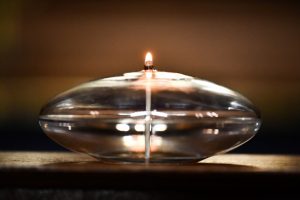 Picture of the lamp next to the Holy Trinity War Memorial

Lighting candles for the departed is a widespread practice in the Christian tradition, as is having a continuously lit sanctuary lamp located in a church to represent an eternal presence. A flame in a war memorial is also a traditional symbol of eternal life. The Australian War Memorial’s website states: An eternal flame at a war memorial symbolizes a nation’s perpetual gratitude towards and remembrance of its war dead.

This notion of remembrance and commemoration using a flame is reflected in the lamp that was lit next to the Holy Trinity War Memorial on Defence Force Sunday in 2014, with the intention that this lamp would burn for the duration of the 100th anniversary of World War 1 (from 4th August 2014 to 11th November 2018).

A lit torch or lamp is also an ancient symbol for education. The light from a lit torch is symbolic of leading a person out of darkness, with the English word education coming from the Latin word “educere” meaning “to lead out”.