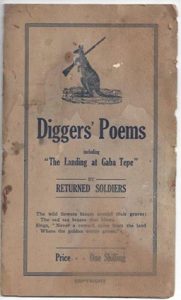 Rev. Ken Box’s great uncle was an ANZAC of World War 1 who was provided with a book of poems written by returning and returned soldiers. These six little known poems are reproduced in this book and represent a “window” into the thinking, emotions, and feelings of the returning ANZACs.

Ken Box notes this little book was found in an old tin trunk of his great uncle’s that was left in his machinery shed after his aunt died.

He states, “The trunk had remained unopened for at least 80 years until curiosity got the better of me and I picked the lock. My great uncle was the man who brought home the machine gun he captured in the action detailed below. He never spoke about the war but service records show that he was shot and wounded on three occasions. I knew him as a generous and loving bushman and farmer so it’s difficult to imagine the courage these men showed.”

“During operations east of Proyart from Aug. 25/26, 1918 SGT Box showed great coolness and skill in leading his platoon, his men were being shelled heavily and were disorganised. SGT Box immediately re-organised them and led them with great skill and dash to their objectives and consolidated. There was a trench to the right of SGT Box occupied by the enemy. Seeing that his flank was threatened he rushed the trench alone and bombed the enemy taking 11 prisoners.”

These six poems may not be of significant literary value, nor may the poems compare with those from the recognised War Poets, such as Siegfried Sassoon or Rupert Brooke. They do represent, however, the voice of the “ordinary” Australian soldier, and are included here for that reason. They were written during or shortly after the conflict had ended and provide a haunting insight into men coming to terms with the situations in which they found themselves. As such, they are part of an important social history archive.

The poems speak of the Australian self-identity, of Australia’s contribution to the war, of mateship and companionship, of grief for the loss of companions, of courage and resilience, and of a hope for a better future.

What means these great white ships at sea

Bringing the spent men back?

They mean that Australia has been there:

They mean she has played the game,

Battered and worn and war-scarred –

Those who had left their land

Strong in their glowing manhood,

By England to take their stand.

Those who had sailed when the war-cloud burst

Out on a distant foam

To the tune of “Australia will be there” –

Thus they are coming home!

What means these absent numbers,

The gaps in the stricken line?

You will find the graves which tell you

On the trail by Lonesome pine

On the slope of Aki Baba

They died the death of heroes

As Australia’s sons know how

Eager for battle they leapt ashore

At the cove where their name was won;

They stormed the cliffs of Sari Bair

Where the death trap gullies run:

On the banks of the Kereves Dere

High on the shell-swept ridges—

Australia has been there!

There is silence on the beaches now,

The battle din has fled

From the gullies, cliffs and ridges,

Where they charged up, fought and beld.

To the glory of the men who died,

And a name that never will!

And now on the fields of Flanders

At Polygon Wood and Broodseinde,

By the frozen Somme and Aisne

In the frozen snow-clad trenches—

Australia is there again.

There are great white vessels sailing,

And they hear the joy and pain,

And the glory of Australia’s sons,

Who have not bled in vain;

Tho’ crippled, helpless, maimed for life,

Tho’ more than death their loss,

There is more than life in the glory

Of the burden of their cross.

Clad in their faded suits of blue,

The men that the white ships bring.

What tho’ their crown a bandage,

Stretcher or cot their throne;

Splints or a crutch their sceptre—

The ANZAC name is their own.

Written after hearing a wealthy merchant speak disparagingly of Australians by E.M.C., a South African.

“We are not cotton spinners all, but some love England and her honour yet”

We stand on the shores of Durban,

And watch the transports go,

To England from Australia,

Hurrying to and fro,

Bearing the men of a nation,

Who are heroes to the core—

To stand or fall by the motherland,

With the cripple and the maim,

With limbs that trail and falter—

Theirs an immortal name.

The deathless name of “Anzac,”

That thrills from Pole to Pole

The remnants of the heroes

On the long and glorious Roll.

And now in their tens of hundreds

Come the men to fill their ranks,

And what can we do to show them

Our love, our pride, our thanks?

But give them a hearty cheer—

While the real elite beat a shocked retreat

Why, they saw one drinking beer.

O God could we show these misers

The path that the Anzacs went

Could they rest in their beds at night-time?

Could they talk with a sneer of Australians

When one or two get drunk?

I’d rather a drunk Australian

Than a wealthy Durban funk!

He’s a better man than you are,

You do not drink—you will not fight

We stand on the shore of Durban

And the glorious name of “Anzac”

Thrills us thro’ and thro’.

But all we can do is cheer them,

And throw them an orange from the shore;

Or perhaps we would try to do more.

They’re coming in tens of thousands,

And here’s to their honour to-day—

Here’s to the Sister Dominion

Who is showing us the way!

You may talk of Balaclava,

And of Trafalgar Bay;

But what about our gallant Australians

That landed at Suvla Bay?

There were Turks along the hillsides,

Our boats were trying to smash;

Till our Monitors came in action

To make the final dash.

I’ve been asked to describe a battle,

Which our memory will always keep;

To our boys it was a great victory—

The landing at Gaba Tepe.

On the 25th morning of April,

Sunday, I know was the day;

So now to describe to you plainly,

The order is given “All Ready”

In lifeboats we all disembark

To take part in this awful battle

And play such a wonderful part.

It was only a partial Division;

Some had seen service before

In bringing to final decision

An affray on a Turkish shore.

Of Australians there were not many,

Still other brigades were at hand;

But the gallant old Third boys were chosen

To make the dread trial to land.

They only numbered Four Thousand,

The cream of Australia’s flock;

And gallantly they marched into action,

A chip off the old British block.

Next came the first and the second,

The fourth and one heavy gun;

When hard pressed the New Zealanders

Came up to help finish the fun.

With assistance from more of our Navy,

We all started of gay and hearty,

Not one lad fainthearted, but glad.

Then, to the small boats that were landing,

Came the furious bursting of shells;

There were hundreds of wounded and dying,

And many were drowning as well.

But on, on they came through the waters,

Eager and mad for a fight;

Each lad knew it would be slaughter,

But a contest for a cause and for right.

At last we effected a landing,

But thousands lay wounded and dead;

All that remained were a handful,

To the Germans and Turks up ahead.

But our lads took all before them,

With rifle and bayonet in hand,

They drove every Turk in disorder,

Far back in his own native land.

For inch after inch they were mined;

Left none of their courage behind.

Over mined trenches and dug-outs,

Onward we dashed without fear;

Forcing those Turks to surrender’

And shouting with cheer after cheer.

After shelling and firing a village,

Came an order “Retire into Line”

And the sight our eyes saw at the finish

Until death, will never leave mine.

‘Tis best that I should go;

At the Empire’s call to stand or fall,

Against this treacherous foe;

You know I won’t forget,

So, dear little one don’t fret.

It fills my soul with pain

To see you cry,

For look the sky

Has a rainbow in the rain,

And death is only sleep,

For should the Fates decree

That I no more

Then truly say to me,

I died for England’s sake

Farewell dear Australia, the land of our birth;

Farewell to our loved ones, our home and our hearth;

No more the sweet wattle, all laden with gold,

For one glimpse of its beauty we’d love to behold.

Now sails the big transport far over the sea,

Three cheers for Australia, the land of the free;

If ever we return to your bright sunny shore,

It will be when our fighting is needed no more.

Farewell dear Australia, it may be for a while;

It may be forever our bright sunny isle;

No matter our, level land, wherever we be,

We’ll fight for you, honour and liberty.

Then cheer for us, pray for us, help us to win,

For our home and our country, for kith and for kin;

Good-bye, dear Australia, until we return

To the land of the emu, the wattle and fern.

We were mates, were Jim and I

Mates right from the start,

From when we went to camp together,

Until he fell, shot through the heart.

We joined the same Battalion,

We trained at Seymour camp;

And many the weary mile we marched,

Through mud and snow and damp.

We had finished up our training’

And were ordered to the front,

To join the boys out there in France,

And help to bear the brunt.

We were sitting in our dug-out,

a- yarning of old times,

When the order came to “stand to,”

We were wanted down the lines.

At last the scrap was over,

Just a scrimmage, that was all;

We never even stopped one,

Though we saw others round us fall.

We were sitting in a dug-out,

Just a hole dug in the ground,

With a roof made out of sandbags,

To keep the bullets off, flying round.

It was one morning in December,

We were fighting in the snow,

And it wasn’t the kind of fighting

That you see in the picture show.

We were sitting in a shell-hole

Waiting for the signal to go

At ‘em man for man

We hopped in his front-line trenches,

And were bombing side by side,

When a sniper’s bullet copped him;

That’s how my cobber died.

He was just a rough Australian,

One the “Frenchies” call “Tres bon,”

And I miss him something awful’

And am lonely now he’s gone.

We’ve done our best together,