Australia as a Dominion of the British Empire was engaged in World War 1 from the 4th August 1914 to 11th November 1918. It was also the first war that Australia responded to as one country. The federation of Australian States occurred fourteen years before the start of the war. This has led to comments that the World War 1 was a “coming of age” experience for Australia and helped unify the Australian States into one nation.

There are many who have reflected on what was gained and what was sacrificed by Australia because of World War 1. The following speech written by Graham Freudenberg and delivered at the ANZAC day memorial at Amiens, Villers-Bretonneux on the 25th April 2013 by the then Australian Foreign Minister, Senator Carr, is reflective of this theme of what was gained and sacrificed by World War 1. On reflecting on this speech it could be written of most wars, which are always in some way a catastrophe to our civilization. At the end of this book there is a reflective section that reviews the notion of ethics and war.

Through the ANZACs’ eyes and words, we may see the deeper meaning of the Australian idea that our national identity was forged in the battlefields of Gallipoli and France. Not only by their prowess and bravery, but by the immensity of the human tragedy called the First World War. The seminal catastrophe of our civilization. How could they not be changed in the crucible? How could their young nation not be changed with them and by them? Australia would never again be able to isolate itself from the rest of the world. The most heartfelt of the inscriptions on our war memorials is “Lest We Forget”. The English poem “The Recessional” from which it is taken, is more than a call to the duty of remembrance. It is also a warning of the arrogance of power. Today we bear in our hearts and minds both meanings, in this consecrated ground amidst the peace and beauty of the France when we say: “Lest we Forget”.

All wars have casualties, but the on-going loss of Australian men in World War 1 to a far-away conflict had a deep impact on all those involved and those who were left behind. 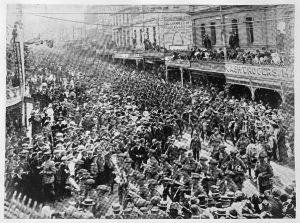 What is interesting is that although efforts were made to bring in conscription, the Australian World War 1 enlistments were all volunteers, and apart from those service people who already held rank in the army, navy, or the reserves, during the war advancement through the ranks was based on a person’s aptitude, performance and ability. That is, in the AIF and related Australian Defence Services, promotion through the ranks in WW1 was by competency. As volunteers in the Australian army, navy and later air force the Australian service personnel chose to go to war for their country and face the hardships and consequences of that decision.

The Australian War Memorial (Canberra) notes the total numbers enlisted by the services and from the different States as the following: 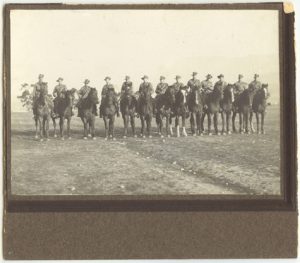 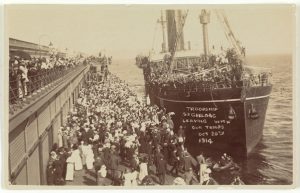 The official Australian War Memorial records note that during the period 4th August 1914 to 11th November 1918 there were 59,357 deaths. Additional personnel died after this date so the Roll of Honour records the number of Australian deaths during World War 1 as 61,514. This includes deaths up to the formal disbandment of the AIF on 31st March 1921.

Across all of the Australia Imperial Forces (AIF) involved in WW1, just under one in five (17.5%) of all service men were killed as a result of the war. The officers in the AIF, who were responsible for leading their soldiers, had an even higher death rate of 23%, getting close to a death date of one in four. If you were an AIF officer from the newly developed Duntroon Military College the death rate was 28%. That is almost one in three of the graduates were killed as a result of their actions in the field (Petrow, 2015).

On average, 38 members of the Australian armed forces died each day during the 1,560 days of the World War 1.

Quoting the Australian War Memorial records at the end of World War 1:

At 64.8% the Australian casualty rate (proportionate to total embarkations) was among the highest of any country in the war. Nearly two out of three of those who enlisted became a casualty. 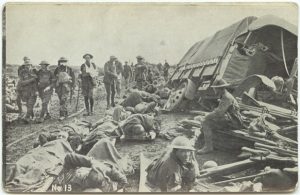 Why Were Casualty Rates So High in WW1?

Several reasons led to the high death rates in World War 1. This war was fought before penicillin and other medications were developed to stop infections, and before fast evacuation from a battlefield to a well-equipped medical field hospital was possible.

The military tactics used, particularly at the start of the war, were also a cause of the high death rate. Soldiers, often on foot, were massed against well-fortified positions, defended by machine guns and artillery. It is assumed that the officers had a higher death rate because they were expected to lead their men into the fight, and this is likely to have put them in more dangerous situations.

For example, over a 24 hour period in the battle for Fromelles on the 19th and 20th July 1916, the Australia Imperial Forces (AIF) suffered the bloodiest 24 hours in the history of the Australian Army with 7328 causalities, including almost 2,000 soldiers killed, over this 24 hour period. Petrow (2015) writing on these casualties noted that in one night at Fromelles in France there were more Australian casualties than in the Boer War, Korean War, and Vietnam War combined. As was so often the reality in World War 1, however, the attack on Fromelles did not dislodge the German army.

On the 15,485 Tasmanians who enlisted for service during World War 1, two thirds enlisted in the first two years, 1914 and 1915 of the war (Henning, 2016). This pattern of enlistments is also shown in the 165 names on the Holy Trinity Northern Tasmanian memorial with 65% enlisting in those years, and 51% signing up in 1915. Tasmania’s contribution of recruitments by eligible males during World War 1 was 38%, which is about the Australian average across all the States.

One of the interesting findings from the 165 men listed on the Holy Trinity memorial is that although most of the men had been born and raised in Tasmania, many had moved to the mainland states for work or family reasons and so enlisted in another Australian state. Nearly 23% signed up outside Tasmania, including some who were overseas, in New Zealand, England, Canada, South Africa and Fiji.

Tasmania recorded 2432 service personnel who died in World War 1, which is 15.7% of all Tasmanians who enlistment. Even so, Herring (2016) noted that many of those who returned to Tasmania and Australia, were damaged physically and/or psychologically in some way and this is also identified in the biographical information on the 165 ANZACs listed on the Holy Trinity Launceston memorial. 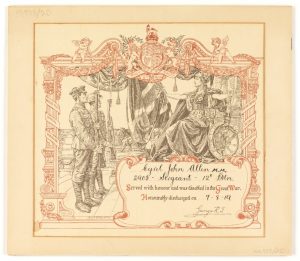 From a Tasmanian perspective, World War 1 did encourage the development of new industries in metals and manufacturing, such as the Electrolytic Zinc Company, and hydro-electric production (Herring, 2016), as well as providing new opportunities for women to move into the world of work. 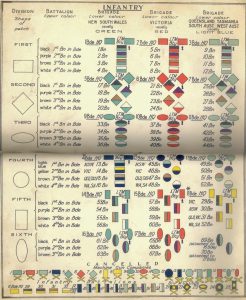 If you’ve looked at the soldier biographies you’ll have noticed one of the pieces of information we usually have on the soldier is the unit he served in. This is very important because the history of the units is usually quite well kept and fairly easily found. By tracing the history of the battalion you can obtain a better idea of the experiences of the individual and the campaigns and battles he was present at. END_OF_DOCUMENT_TOKEN_TO_BE_REPLACED

The Holy Trinity Church World War One Memorial plaque contains the names of both those killed in the war and those who enlisted but returned. At first you may think this seems natural. Why wouldn’t they put the names of all the soldiers on it? END_OF_DOCUMENT_TOKEN_TO_BE_REPLACED